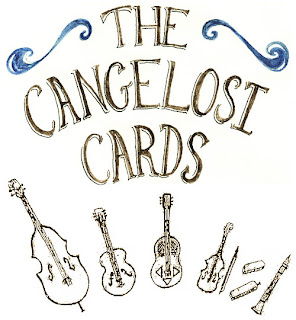 You, yes, you, can own your very own Cangelosi Cards CD! I know, it sounds like the impossible dream, but the impossible has become a reality. The record, entitled The Cangelosi Cards: Clinton Street Recordings contains eight tracks:
My Blue Heaven
It's Like Reaching For The Moon
Blue Yodel No. 2
Ida
September Song
Putting On The Ritz
Treasures Untold
and Anniversary Song
all played by the full eight piece band:
Jake Sanders, guitar
Tamar Korn, vocals
Cassidy Holden, bass
Matt Musselman, trombone
Dennis Lichtman, clarinet and mandolin
Marcus Millius, harmonicas
Karl Meyer, fiddle
and Gordon Webster, piano
The record is wonderful! I've been DJing a few of the tunes and have gotten some pretty funny reactions when people first hear Tamar's voice coming through the speakers. There are some nice, danceable tracks, but this is not a CD aimed primarily at dancers, this is a complex bundle of tunes than can give the listener the gift of ears. This is a record to put on at home with a cup of tea and no competing stimulus. This is a record that will make both your ears, heart, and dancing stronger.
The Cards have changed how we dance, but they've also changed how we listen to music. I've been listening to jazz since the day I was born, but listening to the Cards over the past two years has opened up my mind and given me the greatest ears I could hope to obtain.
My favorite tune is September Song. When the band was deciding which take to put on the record, they were deciding between a technically-better sounding version, and a more emotional version that better expressed the sentiment of the song. The more perfect-but-less-"perfect" one made it onto the record, a clear demonstration of what makes this band and their first record so damn good.
While the physical record is not immediately purchasable online, I do believe you can download it. those of you who do not live in or around NYC would do well to click here.
So if you want one, simply track down the band at one of its many weekly gigs. The record costs ten dollars.
Posted by Eve at 3:05 PM